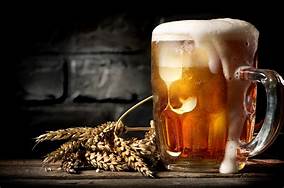 I really don’t care for beer unless it’s very light, and very cold, preferably with a slice of lime. When I was a child, I avoided walking past German-style restaurants where beer was sold because the fumes coming through the door made me nauseous.

However, I love reading about it and am intrigued by the passion with which brewers try out various flavors and combinations for their creations that range in colors almost as enticing as amber stones. Just reading about the innumerable combinations of aromas and flavors is appealing— crisp, clean, hoppy, bitter, malty, roasty, soft, silky, fruity, tart, dark, dry, sour, toffee, or caramel. The words alone offer a veritable journey of the senses.

If you google “The Joy of Beer” as I did on a lark, one comes upon delightful blogs that explore this rich and seemingly infinite universe of beer crafting. And then there are the endlessly diverse names of craft beers—Wychcraft Blonde Beer, Barnstormer, Golden Hare, Goliath, Hobgoblin, Scarecrow Organic Pale Ale, This Is Why We Can’t Have Nice Things, Hazed & Infused Pale Ale, Another Dumb Blond Ale, Weirdo with a Beardo Scotch Ale, My Dad Barleywine, Pit happens Berliner Weiss, Zwickel Me Timbers, Light My Friar, and countless more.

Thus, it is an understatement to say that beer brewing is intensely personal. It is an art form in its own right.

At the same time, beer brewing can be very important in the economy of a region or an entire country. One cannot overstate the role that beer played in many parts of the world. In earlier times, consumption of beer was a critical component of a diet that was often sadly deficient in vitamins and other nutrients. This was certainly true of the period during and around the Thirty Years War in Germany. Moreover beer was often much safer to consume than water, hardly the clean tap water many of us get to enjoy today. 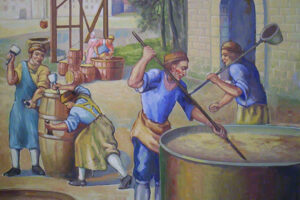 Meanwhile, in medieval times, breweries as well as the import and export of beer were subject to a vast range of regulations and taxes. One of these was the so-called gruitrecht, originally granted to local dioceses by the Holy Roman Emperor before and during the 13th and 14th century. This gruitrecht was a right to tax gruit, and was quite lucrative. 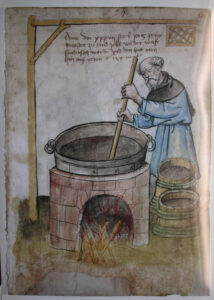 Gruit was a mixture of herbs and was used for bittering and flavoring beer. Such mixtures included heather, chamomile, mugwort, yarrow, and ivy, even nutmeg, cinnamon, and mint to name a few combinations. 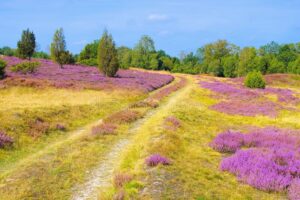 Gruit also helped to render the beer more stable; some mixtures involving sage, rosemary, and bog myrtle have antiseptic properties that enhance their preservative impact. Before hops were used more extensively, gruit was of critical importance for beer making.

Individuals or governmental bodies granted gruitrecht were so-called tax farmers. As a tax farmer, an individual was allowed to keep a portion of the tax monies. Since just about everyone drank beer as a safe, inexpensive form of beverage and nourishment, gruitrecht could be profitable. However, since hops were cheaper, they gradually replaced the use of spices in beer making, and in turn weakened the importance of gruitrecht. 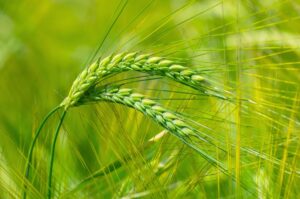 Meanwhile, taxes were placed upon other ingredients for beer making; this as well created a form of economic rent. Barley, oats, and wheat, depending upon location, were all taxed to varying degrees. A tax farmer growing these ingredients could look forward to a stable form of income.

When finalizing my manuscript for the release of THE AMBER CRANE, I regretfully decided to cut out one particular chapter since it wasn’t helpful in driving the story forward.  However, I held on to it. I loved the notion of one of my principal characters loving his brewery not only for its appeal as a craft, even an art form, but also as a way to play a role in the community beyond that afforded to senior masters of the amber guild. The brewery provided a way to produce something of use value during the grim years of the Thirty Years War and to satisfy the palate, while also creating jobs for several people. The excerpt included below is a description of Master Nowak and his apprentice Peter visiting the master’s brewery: 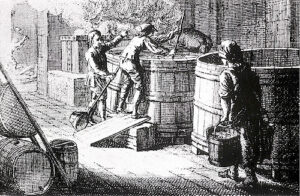 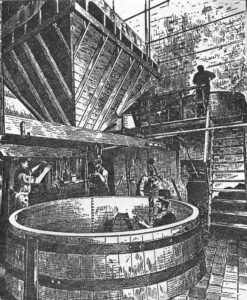 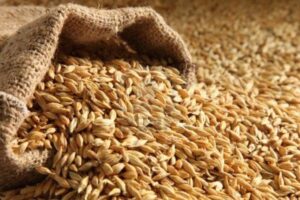 The brewery was just at the edge of town on the side of a hill, where a spring provided clean water. The field on the right looked unkempt and weedy; no one had gotten around to planting a winter crop.

Master Nowak was well liked as a landowner because he was reasonable in the rents he imposed and generous with occasional barrels of beer.

“Indeed, it isn’t, but if you don’t have the labor power to work it, it’s huge.”

Raucous laughter met them as they made their way up the path.

“What in the world?” Master Nowak said under his breath.

“Watch out,” Peter shouted, pulling him to the side.

A beer barrel thundered down the hill, heading straight to where they had been just a moment earlier. Then it slowed down where the ground leveled out. It hit a rock, wobbled sideways, and came to a stop, precariously perched halfway in the ditch next to the path. Frantic thumping sounds from the barrel indicated that it had an occupant.

Three young men, wearing aprons, stood at the top, pointing at the barrel and laughing uproariously. When they saw Master Nowak and Peter, they came running down. One of them set to freeing the barrel’s inmate from his beery jail, while the two others stood in front of the master, out of breath and looking shocked at what could have happened. “Sorry, Master Nowak, we didn’t see you on the path,” said the oldest of them.

“Don’t you have better things to do than this tomfoolery?” Master Nowak glanced at the young man who had emerged from the barrel. He looked dazed but apparently not hurt in any significant way; he was rubbing his bottom with one hand and trying to adjust his clothes, which had come undone.

“We were done with our chores, Master Nowak,” they all said in unison.

“I hope you didn’t break the barrel,” he responded sternly, but Peter thought he could see his lips twitching.

The young men looked chastened, but when they walked off to return to the yard, they were laughing again and clapping each other on the shoulders.

The brewery consisted of a yard bordered by sheds and a central building with a vaulted ceiling. A cooling cellar was at the edge of the property, a stone arch over a doorway set deep into the ground.

The yard was quiet; a brindle cat sat on top of a pile of barrels in the late November sunshine, licking its paws and looking pleased with the life. There was no movement from the pigpen; apparently, the resident pigs were napping.

When Master Nowak pulled open the door to the main building, a cloud of fumes enveloped them immediately.

Master Nowak grinned. “Ah, the pleasant aroma of fermentation—not to mention hops being boiled. You get used to it.”

It was warm inside, and a large oven on the side had a fire going. A man was just feeding more logs into it. Another one stood in front of a copper kettle in the center of the room, stirring it with a long wooden spoon. The men glanced at them and sketched a nod, but continued working.

Master Nowak pointed at the kettle. “See that? I just got that.”

Peter nodded to show his appreciation, though in truth, to him one kettle looked much like any other.

While Master Nowak spoke to the workers, Peter wandered around looking at everything. One wooden barrel contained a curious mess soaking in water giving off a strange sweet-sour smell. “What’s that?” he asked the man coming with another bucket of the stuff and pouring it into the barrel.

“You haven’t seen malt before, young man? You know—sprouted barley seeds. No malt, no beer.”

“It looks like a lot of barley.” Peter studied the steaming kettle. For an instant, he thought of the people walking down the road with their drawn hungry faces—they would like that barley. But people needed beer as well. “So what do you do with it?”

“Once it’s been soaked, we strain it and pour the liquid into that pot over there,” the man pointing at the copper kettle. “Then we add hops and boil it for good long while. Depending on the master brewer’s wishes, that’s when we might also add some gruit.”

“Oh, you know, all sorts of herbs to add flavor. We have been experimenting with fennel seed and juniper berries. When everything has cooled off a bit, we add yeast, and then, once all that has fermented, there is your beer.”

“What do you do with the leftover barley seeds?”

“We feed it to the pigs out in the yard. The pigs like it, and later we get to eat the pigs. So it all works out.”

Master Nowak came over. “How are you doing, Matthias? How is the family?”

“Thank you, Master Nowak. We are fine. Tell the mistress our thanks for the pickled herring. It was wonderful.”

Wordlessly, thinking of the beer he drank every day without having ever thought about all the work that went into its production, Peter followed Master Nowak outside and across the yard to the office.

The master brewer looked harried while Master Nowak looked over the accounts. “I see production went down lately,” he said mildly.

“Well, we lost some workers in the summer. You know that.”

“Also, there is the ongoing problem about hops not being delivered in a timely fashion. You really need to find another grower who is more reliable,” the master brewer said. “I know he has supplied the brewery for years, but still, this is unacceptable.”

“Did you manage to forget the state of most of the villages around here?” Master Nowak snapped. “All the peasants are struggling. In some villages, there is practically nobody left. We should be grateful we are getting any hops at all.”

The master brewer looked at the ledger in front of him, a sullen expression on his face. “I know,” he muttered. “We will do the best we can.”

“Of course, Master Pohl, I know you will.” Master Nowak’s voice had lost its edge. “Meanwhile, I have been asking around for more workers. I will let you know. Now if there is nothing else, I will have to go to my workshop.” He turned, making a sign to Peter to follow, and walked out.

“Why were you so stern with him?” Peter asked as they made their way back to the center of town. “He sounded really upset about not being able to get what he needed for the brewery.”

Master Nowak looked at Peter sideways. “I know he is only doing his job.” He rubbed a hand over his face. “But at least he is fed and clothed and housed, and so is his family. Things will get better eventually; they will have survived when many others will be long gone. Then again, given the cost of production not to mention all the rules and regulations, I suspect eventually these small breweries will all be gone. Only the large ones will survive.”