The time-slip historical fiction book The Amber Crane about Peter, a 17th century amber guild apprentice, was inspired by three central themes. Since my childhood I have loved amber, a gemstone full of mystery and power. Amber is inextricably linked to the history of Pomerania, having occupied center stage in trade and politics over centuries. The second inspiration emerged from the stories my mother used to tell me about her childhood home in Pomerania, close to the Baltic Sea. And my mother and other relatives also shared stories of their experiences during World War II, including the last months and the evacuation from Pomerania and East Prussia. Finally, I was intrigued by the notion of a form of time travel in reverse. Usually in time travel tales individuals are sent back in time. I wondered what it would be like for an individual from the past to show up on our doorstep. Thus, the story of a young man from 1644-1645, living in the last years of the Thirty Years War in Pomerania, emerged, and he came to experience life in the same location in 1944-1945. The linking element between the two time frames is a magical piece of amber that has the power to transport my protagonist three hundred years into the future.

Meanwhile, I would like to share some images and maps of places that are referenced in the book.

In the Baltic regions, amber was referred to as “Baltic gold.” Another name for it,”Tears of the Gods,” was derived from several myths about the origins of this remarkable gemstone.

I will write about amber and the amber trade in greater detail in other blog posts.

Here I just want to mention the famous Slupsk Bear. It was found in a peat bog near the town of Slupsk and is at least 3,000 years old. Some archaeologists think it might be even older as similar amber bears (and other little amber animals like birds and elk) have been found at sites in Jutland, Denmark, dating to the Mesolithic period (12,000-3,900 BC). 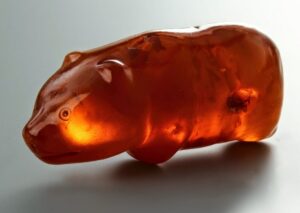 This term Paternostermakers was used to describe skilled amber craftsmen, sometimes referred to as “lathe turners,” in recognition of the fact that they spent a great deal of their time making rosary beads. 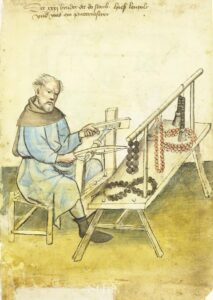 During his excursions into the 20th century, Peter notices a print of Albrecht Dürer’s rabbit. Cheap reprints of this lovable animal used to adorn children’s bedrooms in many parts of Germany. 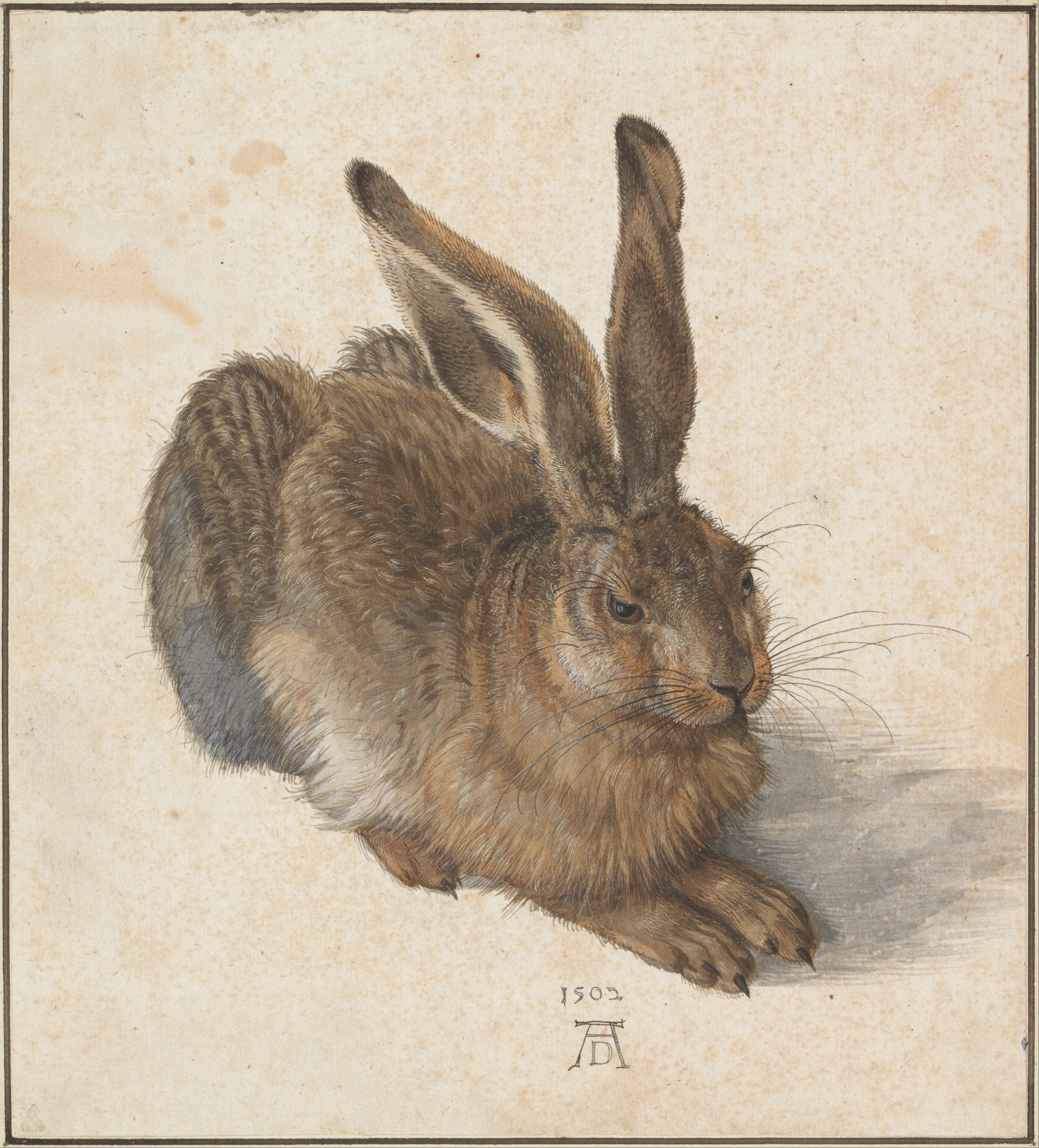 Bruegel was a renowned painter, printmaker, and artist of Dutch and Flemish Renaissance painting, was known for his landscapes and peasant scenes. Here is an example of the colorful images he created. 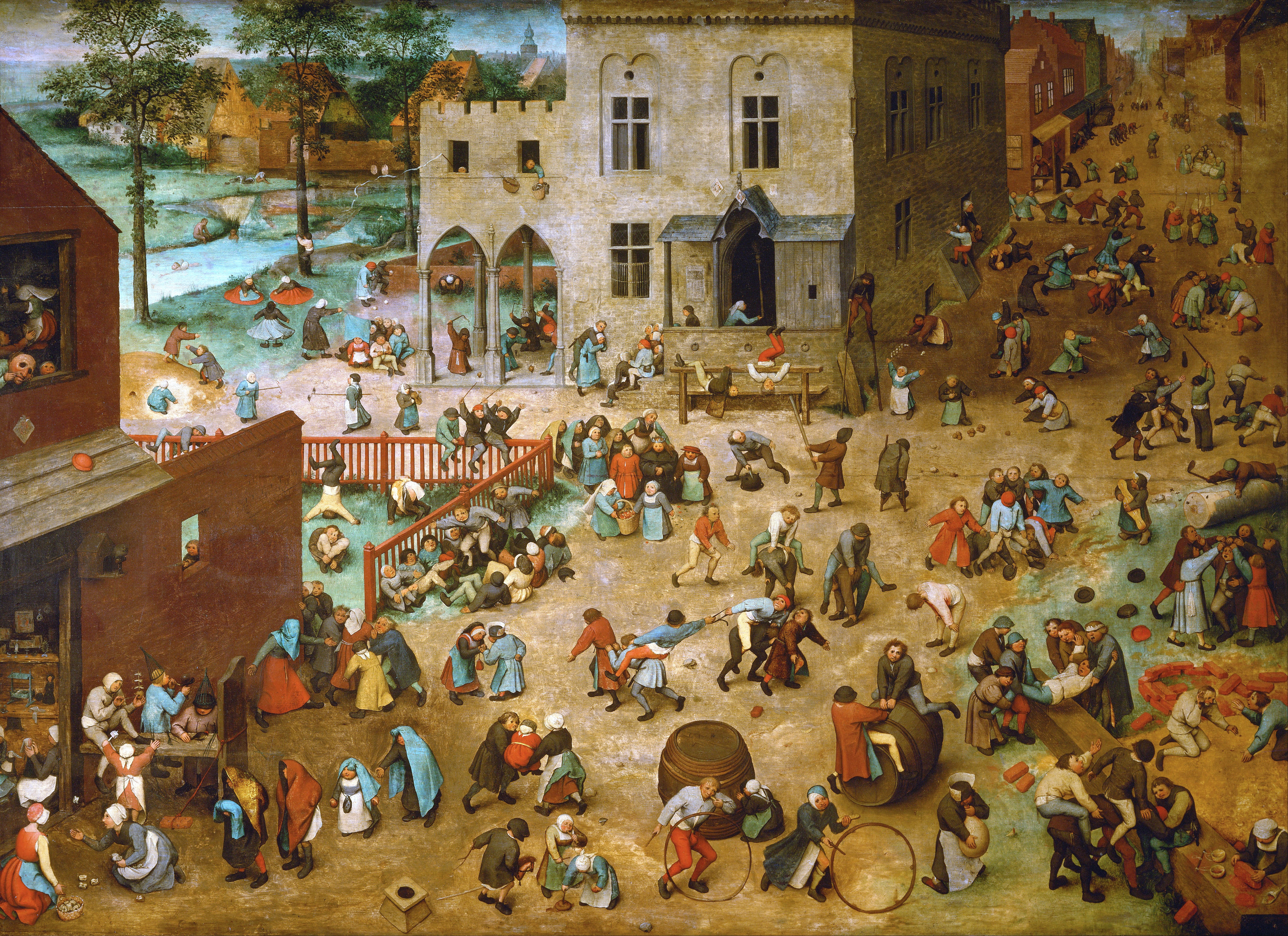 Pomerania – etymology of the name

Pomerania (Polish: Pomorze; German: Pommern; Kashubian: Pòmòrskô) is a historical region on the southern shore of the Baltic Sea in Central Europe, split between Poland and Germany. Today, the western part of Pomerania belongs to the German states of Mecklenburg-Western Pomerania and Brandenburg, while the eastern part belongs to the West Pomeranian and Pomeranian voivodeships of Poland.

The name is derived from “po more.” In Polish, Kasubian, and Polabian, part of the West Slavic subgroup of languages, the prefix “po-” means along and “more” the sea; thus, Pomorze or Pomerania means “Land at the Sea.”  And a very beautiful land it is. I highly recommend visiting all the states along the Baltic. 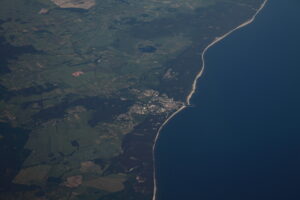 Aerial view of the town of Stolpmünde (Ustka)

My protagonist never got to visit this town, the heart of the amber trade in medieval times. But he was planning to spend some of his journeyman time there. You can see its location on the map between Lithuania and Poland. 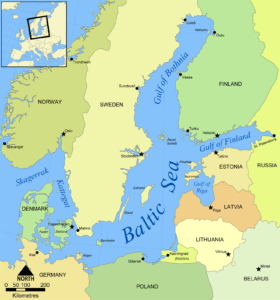 Excerpt of a map of Pomerania from 1905

If you look carefully, you can see Stolpmünde, the village of Lübzow, the town of Stolp, and the village of Muttrin, all of which feature into the story. 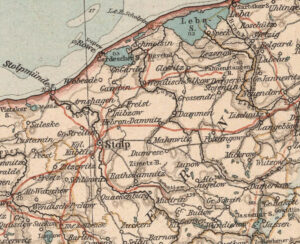 Muttrin was a Zitzewitz fief since the early 1300s. After 1945, it became a part of Poland. The manor house, where Peter meets Lioba, was used as an administrative center for a number of years. It has now become private property. 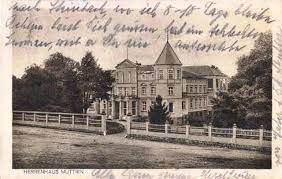 This road connects Muttrin and another village. It is typical for the area. 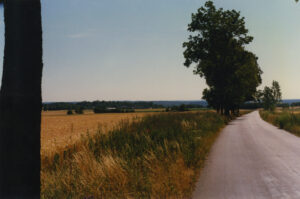 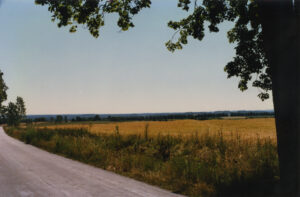 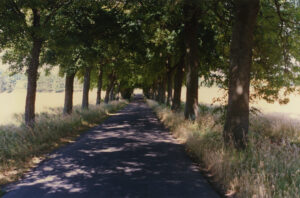 Jacob von Zitzewitz, Chancellor of Duke Philipp I von Pommern-Wolgast, planted the famous Muttrin linden tree in 1555 to commemorate his appointment to the council of the ducal house for life. He planted it on top of a hill at a distance of approximately 30 miles from the sea.

The linden was called the Schifferlinde (mariners’ linden tree). According to the von Zitzewitz family chronicle, on dark and stormy nights, members of the family would light a bonfire next to the tree so that it served as a beacon that could be seen from afar by sailors navigating the rocky waves of the Baltic. The fishermen rewarded him with salt and herrings. The linden tree was eventually marked in the nautical charts as a guide.

In 1931, the tree was declared a protected natural monument of the Stolp district. It had reached a height of over 18 meters, and at its widest point the crown measured 24 meters, with a trunk width of 6 meters. 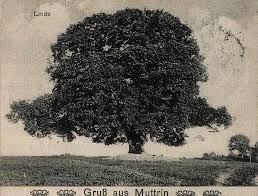 It is still standing even though about half of the branches were lost when the tree was hit by lightning during a storm in the 1980s. A delegation from the town of Stolp appears every year to inspect the tree and to measure its circumference. 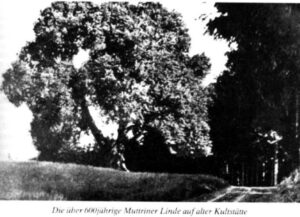 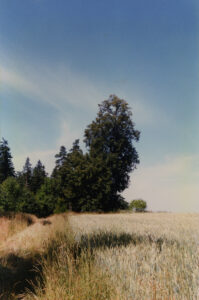 Muttrin linden tree in 1994, after lightning had struck

The New Tower in Stolp (Slupsk), also known as the ‘Witches’ Tower’ [Hexenbastei] (Baszta Czarnownic in Polish), was built around 1325 and was formerly part of the town wall. In the 17th century, it was used as a prison, housing those accused of witchcraft. As many as eighteen women were murdered there, and some were burned at the stake. Today, the tower has become an art gallery.

Starting in late 1944, as many as 14 million Germans from East Prussia, Pomerania, Brandenburg, and Silesia fled to the West.

The German evacuation from Central and Eastern Europe ahead of the Red Army advance in World War II was delayed until the last moment. Plans to evacuate people from the territories controlled by Nazi Germany in Central and Eastern Europe, including from the former eastern territories of Germany as well as occupied territories, were prepared by German authorities only when the defeat was inevitable, resulting in utter chaos.

When the Soviet troops approached in early March 1945 towards the end of World War II, parts of the German 7th Panzer Division took up residence in Muttrin. On March 7, 1945, the villagers began to flee toward Gotenhafen (Gdynia) where they hoped to get onto a ship. On the way, they were attacked by Soviet fighter planes and disbanded. Some of the trek participants reached Gotenhafen and managed to escape by ship to Denmark. The greater part, however, was overtaken by the Soviet troops and returned home from where they were eventually expelled over the course of the following two years.

On March 8, 1945, Muttrin was occupied by Soviet troops who had advanced from the direction of Groß Gansen (Gałąźnia Wielka). These set up a command post. On July 10, 1946, a Polish administration was established.

Muttrin became Motarzyno and a district of Gmina Dębnica Kaszubska in the Powiat Słupski. Between 1975 and 1998 the village belonged to the Slupsk Voivodeship until it was incorporated into the Pomeranian Voivodeship in 1999.

The Wilhelm Gustloff was a German armed military transport ship. In January 1945, it was evacuating German civilian refugees from East Prussia, Lithuania, Latvia, Poland and Estonia and military personnel from Gotenhafen (Gdynia) as the Red Army advanced. On 30 January 1945, the ship was sunk by a Soviet submarine S-13 in the Baltic Sea. By one estimate, 9,400 people died, which makes it the largest loss of life in a single ship sinking in history. 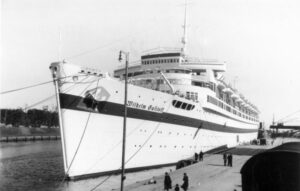 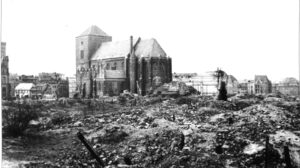 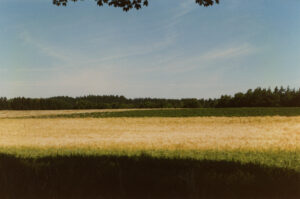 And Stolpmünde (Ustka), a pleasant harbor town and former member of the Hanseatic Trade League, is a joy to visit. 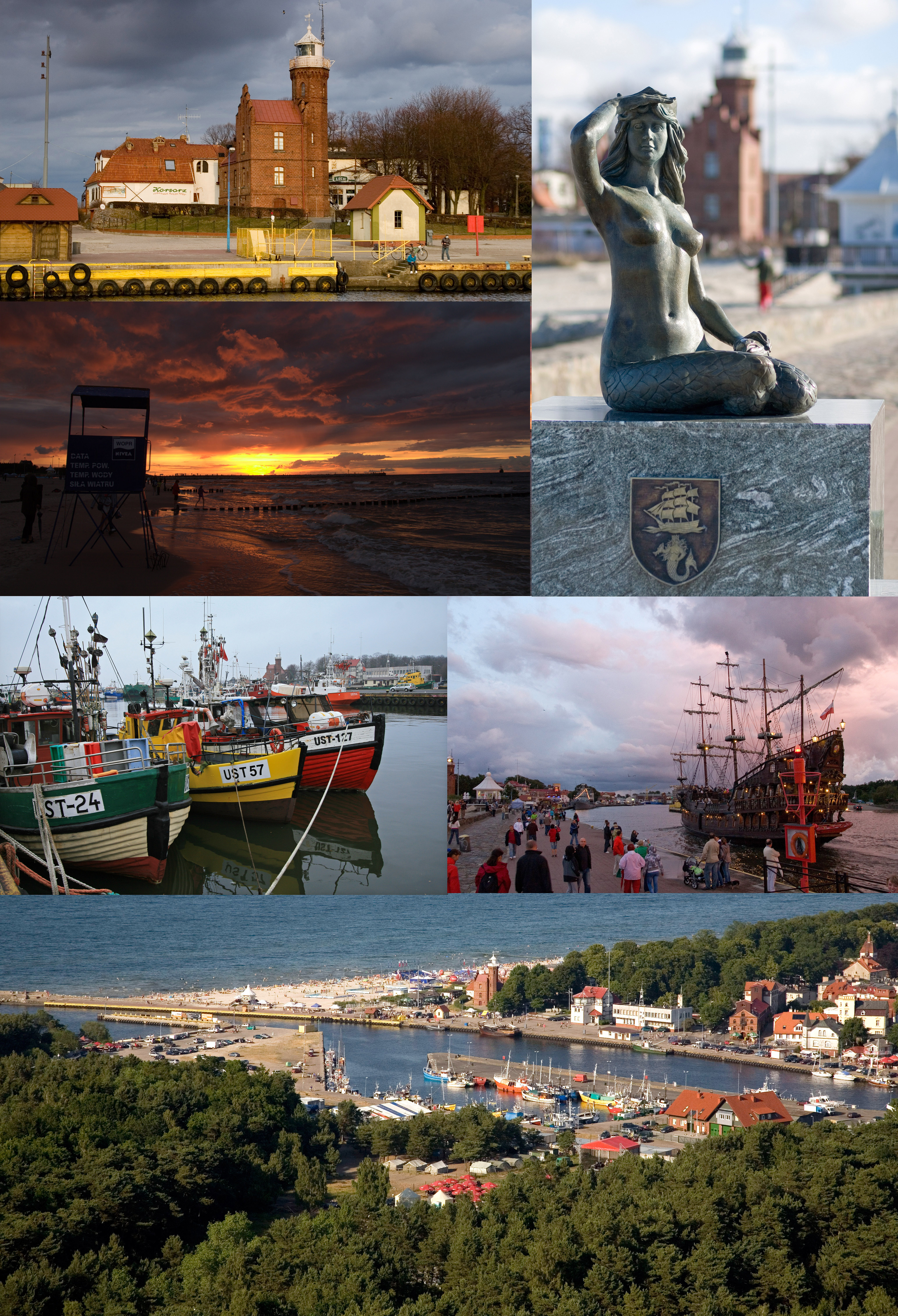 I indicate sources only where the images do not come from my personal stock.

Area around the town of Stolp, Pomerania in 1905. Replicated from https://www.stolp.de/landkarten_landkreis_stolp.html. The original map shows Pomerania in its entirety and is owned by the Bibliothek allgemeinen und praktischen Wissens für Militäranwärter Band I, 1905, Deutsches Verlaghaus Bong & Co Berlin, Leipzig, Wien, and Stuttgart. [Public Domain]